Research in STEM (Science, Technology, Engineering & Math) learning has a lot to say about what makes for effective, engaging STEM education. Among the key factors: it capitalizes on students’ early interests and experiences, identifies and builds on what they know, and provides opportunities to engage in the practices of science and mathematics to sustain their interest. In other words, throughout their schooling, students should learn to investigate questions about the world that they come across in daily life, in much the same way that scientists and mathematicians do. (successfulSTEMeducatgion.org)

The Next Generation Science Standards (NGSS) Framework goes on to emphasize that: “…learning about science and engineering involves integration of the knowledge of scientific explanations (i.e., content knowledge) and the practices needed to engage in scientific inquiry and engineering design. Thus the framework seeks to illustrate how knowledge and practice must be intertwined in designing learning experiences in K–12 science education.”

What was your favorite study this year at school?  For me it has to be the classic answer, “The one we are in right now”.  Isn’t that the truth?  As teachers there is so much to enjoy in our thematic approach at Lake and Park. It allows for creativity, collaboration, thoughtful study and personal expression.  It is important for us to embrace flexibility and be responsive to children’s needs and interests.  In many ways we never feel finished, though it is exciting to begin again and watch the momentum build as each child engages in a new topic in their own way.  I admire the courage I witness every day as children take the risk and delve into answering an open-ended exploration. “Is water alive?” or “What might happen when we roll two different size balls down the same track?”

Teachers at Lake and Park are asked to take risks also.  We delve into subjects that may not be an area of expertise and we learn alongside the children.  We are asked to try new things; we challenge ourselves and support each other.  Our study of physics and the evolution of scientific thought is an example of learning by doing for all of us.

In the summer of 2015 Quynh Cao and I were by the National Science Teachers Association  to participate in a weeklong training program, The National Teachers Academy.   We flew to Nw Jersey in late July and spent a week at the Liberty Science Center with teachers from forty-eight states, working through ideas about best practices in teaching science as they relate to the Next Generation Science Standards (NGSS).  The focus of our week was Newton’s Laws of Force and Motion.  It was an engaging week of hands-on exploration and we knew the children at Lake and Park would learn so much during a study centered around this topic.

When Quynh and I sat down to begin planning the study for Lake and Park we thought about Newton in a historical context:  Newton was born in 1642. Who were the scientists that influenced him and how has scientific thought continued to develop since then?  We knew literature groups could engage in learning about the lives and contributions of scientists.  Are there any universal character traits of scientists?

As we posed these questions in our various classrooms:  What do scientists do?  How are they alike?. Initial responses were long. Details were added as knowledge grew.  Students began to identify when they were taking on some of these traits themselves.

Quynh took the lead running the Physics Lab. Each day she set up different experiences and materials for students to explore.  Teacher led group discussions guided inquiry. Quynh was careful to ask questions, rather than telling the "why", thereby not revealing too much, making sure that the vital discovery piece, so pivotal to deeper understanding was reserved for each child. Students observed, collected data, made hypotheses, and experimented while working collaboratively in small groups. This approach was student driven, based on an individual’s curiosity and experience.  Room--time and space-- was provided for student-led discoveries.

While Quynh worked with classes throughout the school, her homeroom students worked with me to create demonstrations that illustrated a principle or explored a law or conducted an experiment. Projects were developed and tested in class. As the oldest students were asked to present their work to others, the opportunities for peer teaching and  for guiding younger students brought social skills into play.

Quynh’s class also read and discussed the evolution of scientific thinking with Camille Hayward, reading several books on Galileo, Newton and Einstein as a means of learning about the history of scientific thought. This was a wonderful opportunity for Camille to work directly with the Intermediate students. Across the grades, students read biographies of the scientists mentioned above and  many others. The study contained many highlights as well as collective and individual “Aha” moments.

Physics on Wheels Comes to Lake and Park

As a part of this unit, The Pacific Science Center Physics on Wheels program came to school for a day.  The visit included individual classroom workshops and a lab space filled with demonstrations and experiments.

The Hawking Family worked at home to master Newton’s rainbow, and then demonstrated the experiment they had created to small groups of children. This inspired further investigation into light and color and optics.

Maudie James and I developed a space for the whole student population to "tinker in".  Equipped with tape and tubes and pulleys and hooks, marbles and velcro, The Tinker Lab remains busy most days with children creating inventions, and working on challenges involving force, motion, and velocity. Thank you to everyone for making it possible by cleaning out closets and garages and sharing your treasures and purchasing tape.  After making an invention or machine, children draw a model of it and tell a teacher about it so that ideas are written down.  Often the project is named. Those who can write, describe it in their own terms. 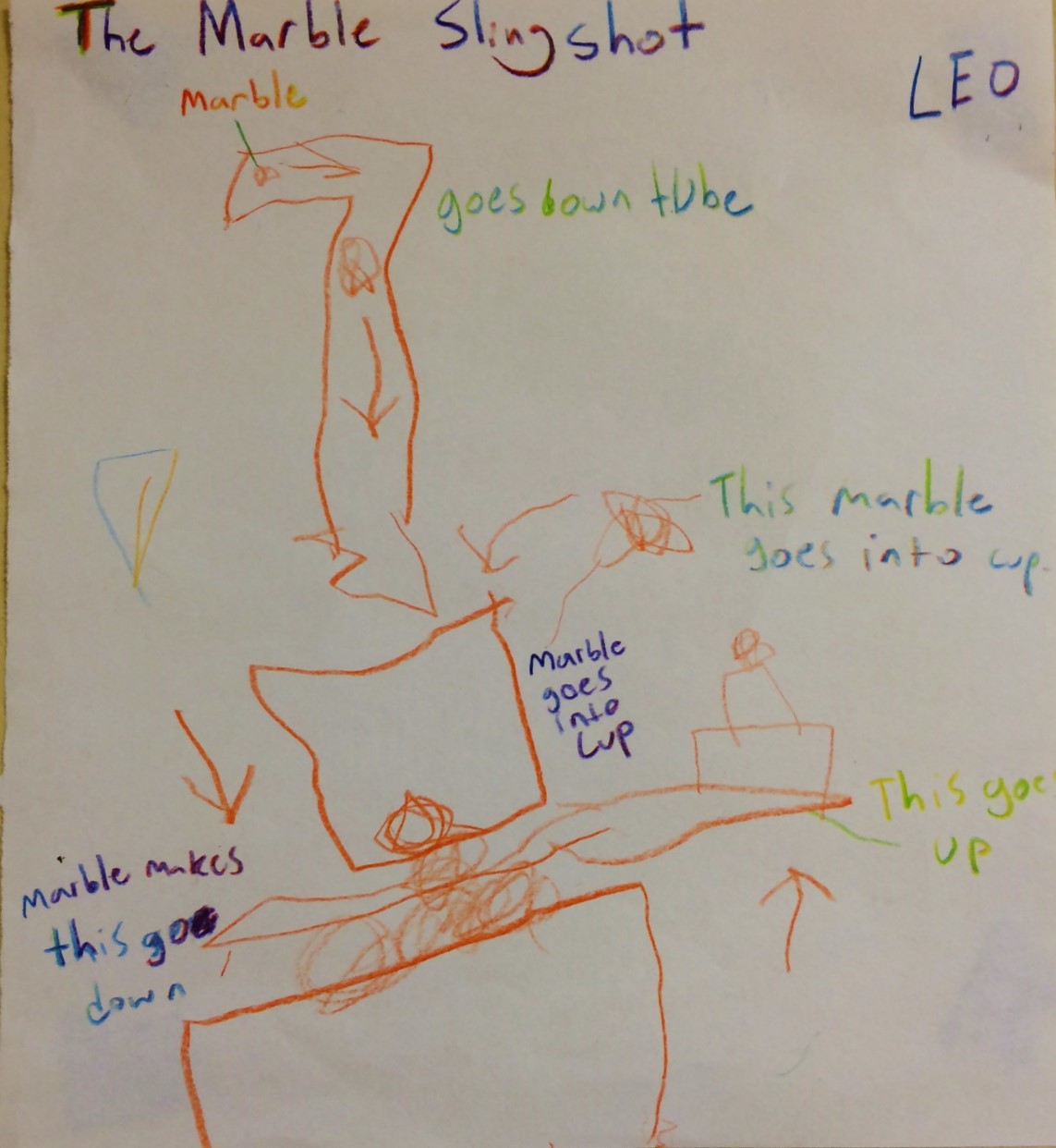 When we came together to share and celebrate our common learning, George told us about Hawking's current work to which George had been introduced to this spring.  He graciously answered questions.

As the study was coming to a close we had one more amazing opportunity.  As each class learned about working scientist Dr.  Stephen Hawking we were invited to submit some questions to him directly for his consideration.  He will respond back to our specific queries. We will gather as a school in the fall to hear his replies to such thoughts as:  What would happen if the earth stopped spinning?  Do black holes benefit earth in anyway?  If you could explore anywhere, where would you go?

The Upper Primary students each researched a specific scientist, from Archimedes to Hawking, creating a timeline of scientific thinking which they presented at an All School Meeting. By this point, everyone was working as a scientist. It was exciting to take a moment to look around the room and wonder who might possibly make the next major scientific breakthrough at some point in the future.

On the same day as the Timeline Presentation students visited the Science Fair as presented by Quynh’s class.

The day ended with children rolling very big balls out in the grassy meadow of Mt. Baker Park and riding bikes, perhaps with a greater understanding of how that bicycle stays upright when in motion and why that ball might come to a stop.

As for this summer?  I know teachers are planning on more professional development experiences, exploration and reflection.    We shall not cease from exploration And the end of all our exploring Will be to arrive where we started And know the place for the first time. Through the unknown, remembered gate When the last of earth left to discover Is that which was the beginning; At the source of the longest river The voice of the hidden waterfall And the children in the apple-tree Not known, because not looked for But heard, half-heard, in the stillness Between two waves of the sea. T.S. Eliot from Four Quartets

You Are From Here: Presenting the Lake and Park Class of 2020

"A Good Poem Can Jolt Our Minds" by Eileen