A Study of Bees by Morgan Padgett

During the first week of school, children throughout the school were asked, "What is a bee?". Considering their own unique knowledge about these small insects, the children created bee collages, clay sculptures and easel paintings. After sharing their bee knowledge and experiences with peers and teachers they shared their wonderings; thoughtful questions that guided our exploration of bees and wasps for the month of September.

Sitting next to an aquarium full of crickets, a small group of children silently listened to their chirping. "Why do they make that sound?" one child asked. "To communicate with each other." said another. As they listened, they drew the creatures they saw, careful to notice how many legs, antennae, eyes and body parts each cricket had.

Turning over leaves and digging in the soil at Triangle Park, children searched for live insects. Catching them in clear containers, they observed their movements and shared their observations with one another. "What makes an insect an insect?" we wondered.

"Why are there so many different types of bees?" -Rose

In the following days, we collected deceased bees and wasps and compared their bodies to other insects we had collected. We learned how to identify attributes of different insects. Older children learned how to classify bees into different phyla classes, orders, families, genera and species. We learned that bees evolved from wasps millions of years ago and as they shifted from prey-seeking species to nectar-seeking species, soft fur covered their bodies to help them collect pollen.

As our discoveries grew, enormous paintings of ants, ladybugs, bees, wasps and butterflies emerged at the large easels. Insects were grouped into categories in sorting boards. Stories were told through drawings and collages. Dramatic stories were acted out using fabric wings. Plays were performed using the big blocks as a bee hive. Honey from around the state was sampled on apples. Beeswax was sculpted and formed into candles.

In literacy groups, children read Flight of the Honey Bee by Raymond Huber, Are You a Bee? by Judy Allen, and The Magic School Bus: Inside a Beehive by Joanna Cole.

Some classes read a chapter book. The Bee Book by Jakob Streit, about the relationship between a grandfather and his grandson and their mutual interest in beekeeping. We all read and loved Winnie-the-Pooh and Some Bees by A.A. Milne. Some children acted out the endearing scene of Winnie-the-Pooh floating up to a bee hive in a tree with the help of a blue balloon. 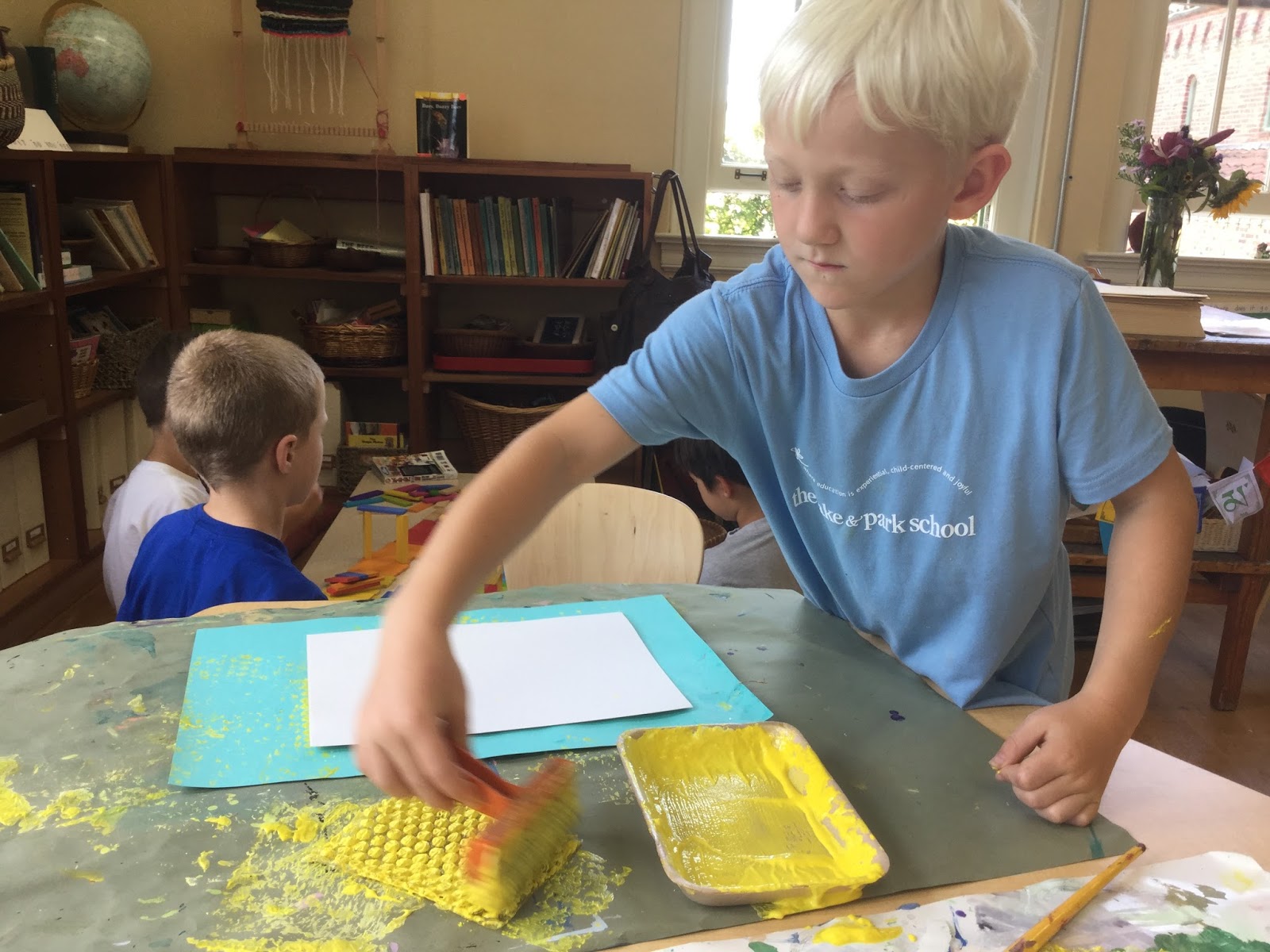 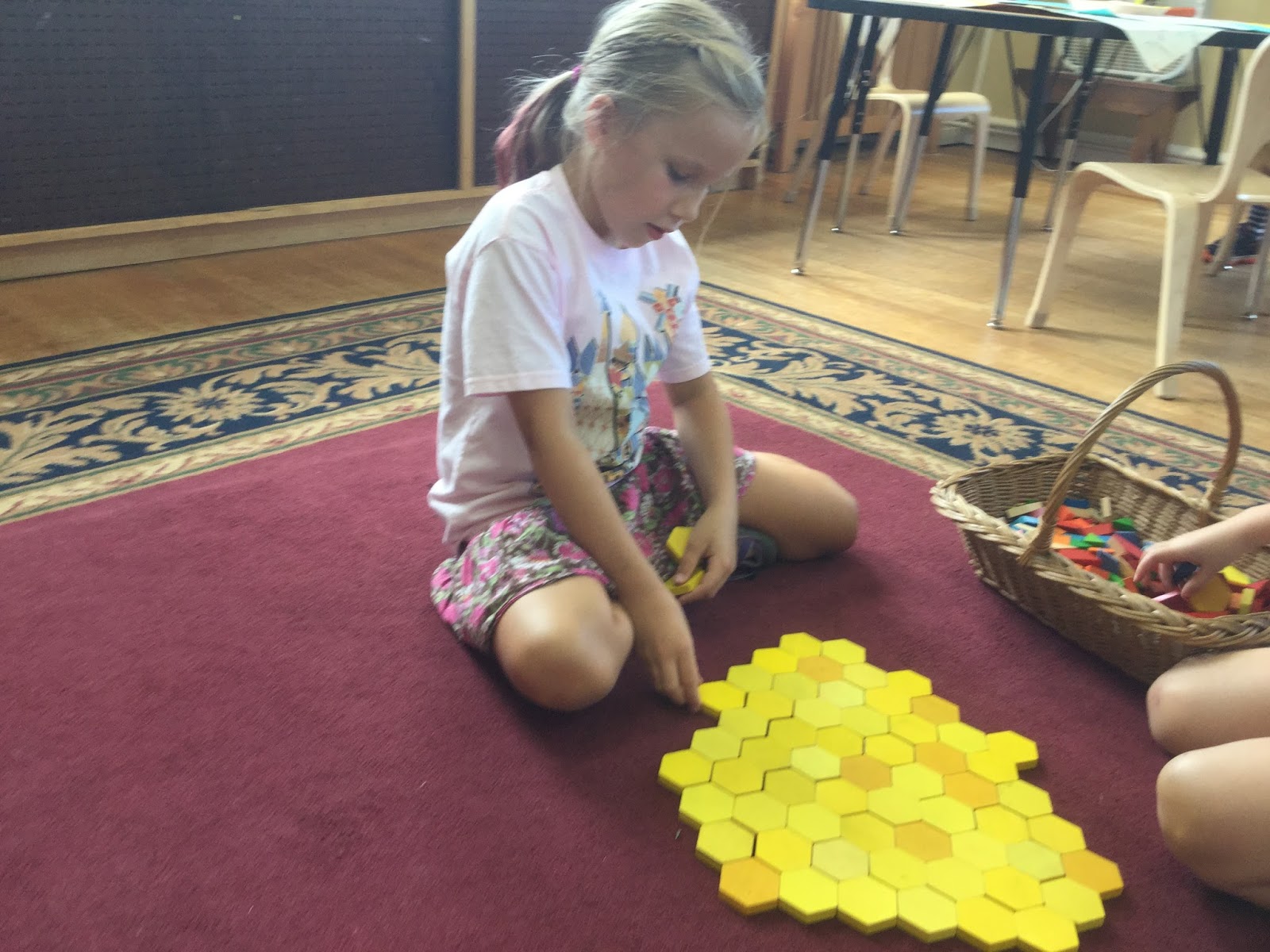 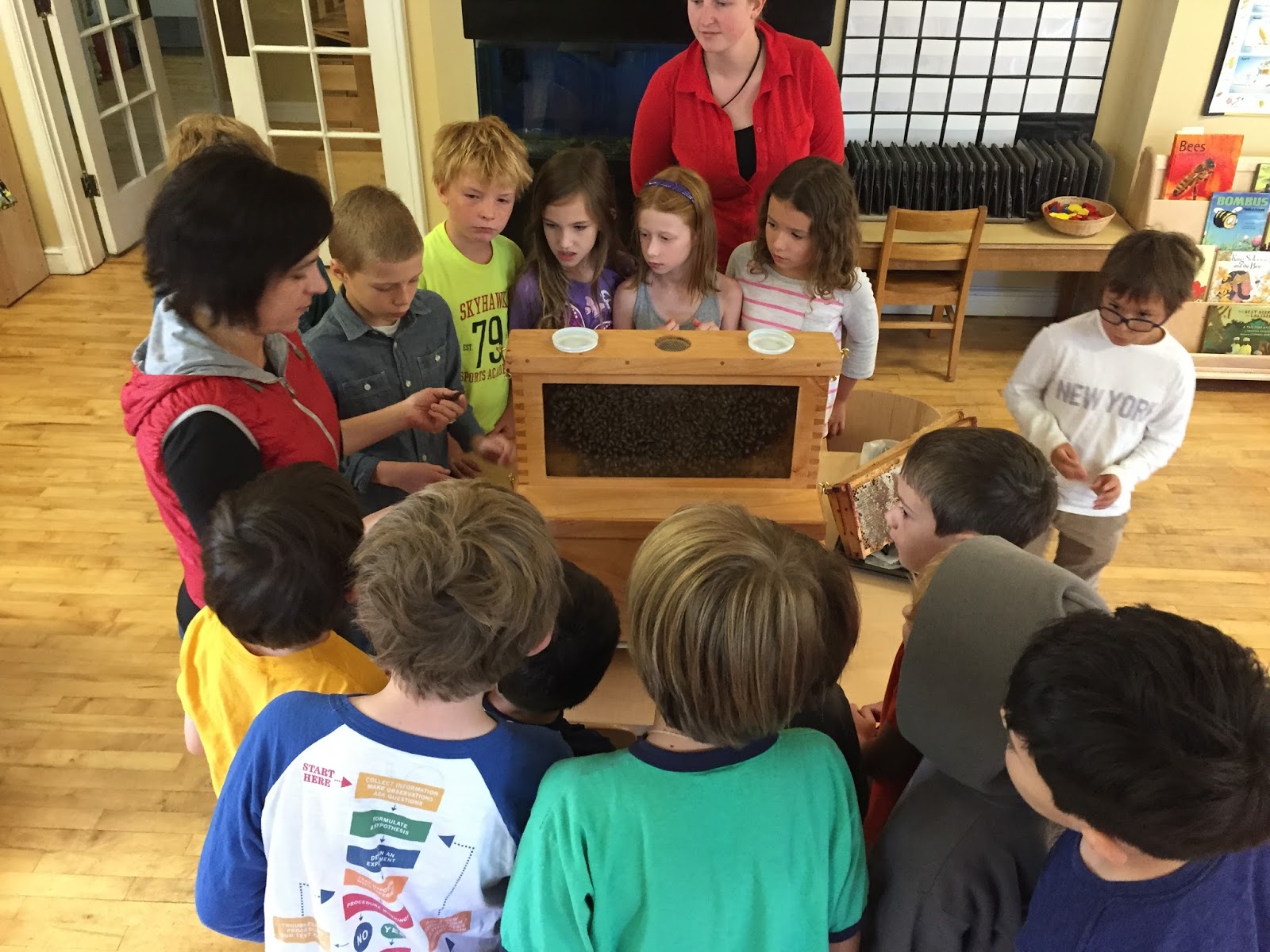 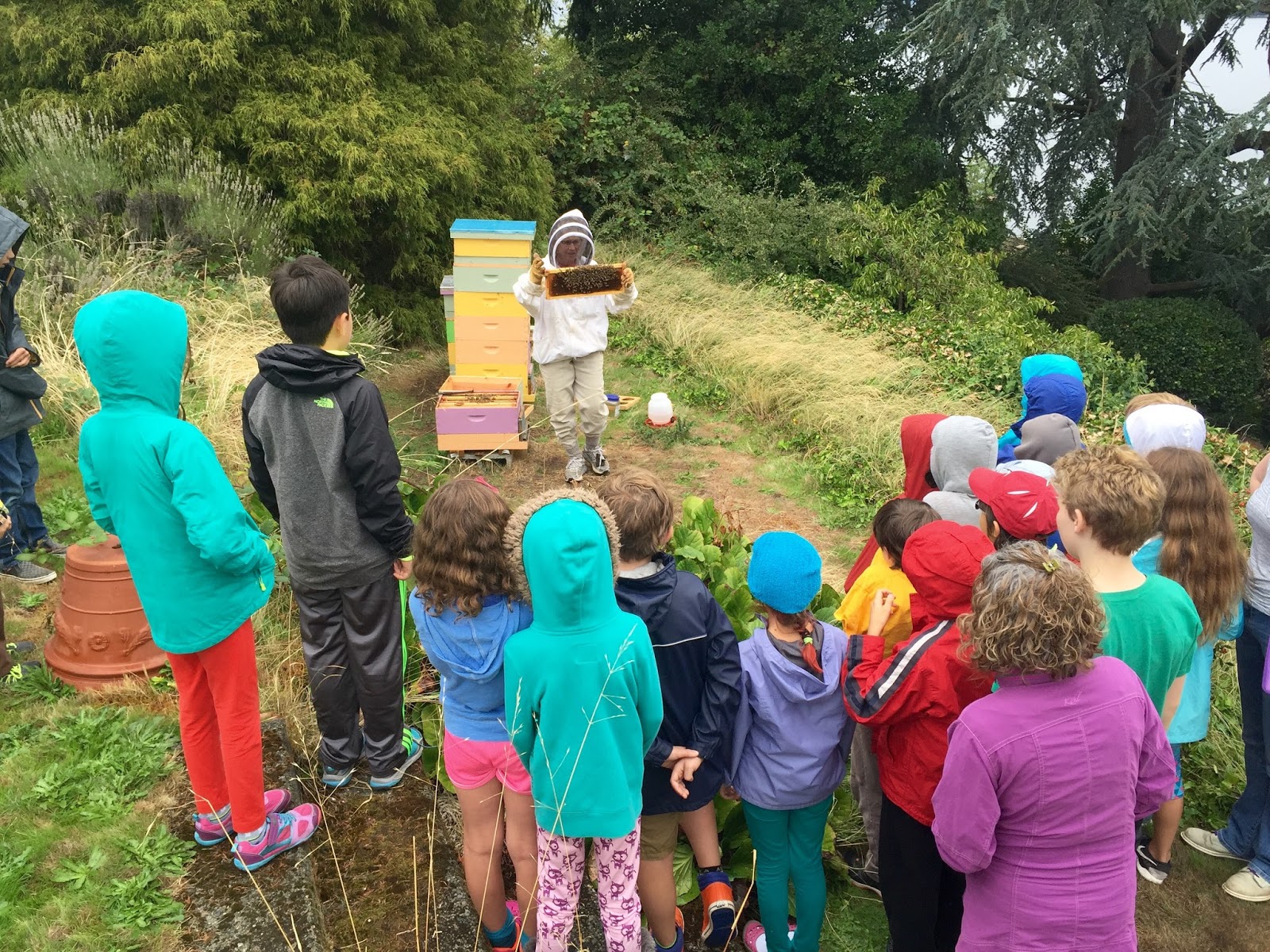 "Why do bees make so many hexagons?" -Finn

The entire school studied the hexagon as we marveled at the creation of such perfectly shaped hexagons in each bee hive. During math lessons, we focused on geometry with the use of pattern blocks. How could we use triangles, trapezoids and square to create large hexagons?

Read more about why bees choose perfect hexagons to create there hives here.

"Why do female bees have to do more work than males?" -Gavin

As we read about the matriarchal social structure of the hive, we grew increasingly curious about the inner-workings of a hive. What exactly did the bees do inside the hive? We were fortunate to connect with several beekeepers in our community and were so thankful for their willingness to share their practice with us. Renee Lenti, Ardin's mom, visited the school with her observational hive one morning. This experience provided us with the unique opportunity to watch the inner workings of a hive and observe the the queen, workers and drones working as one unit.

Students also visited a beekeeper from the Puget Sound Beekeeper's Association one afternoon. There, the children learned about the responsibilities involved in beekeeping. While the beekeeper wore her protective bee suit for part of the visit, the students were surprised to see her remove her suit and interact with the bees to show how docile the creatures can be.

During our time in Madison Park, we all had a chance to visit Bill McQueen's home and watch him extract honey from his hive. While he used a centrifuge to extract his honey he also showed us how others use a filtration system. Enjoying a sample of his peppermint-flavored honey, we learned that different hives produce honey with slightly different tastes depending on which flowers they pollinate.

"Do bees take nectar from the same flower for their whole life?" - Ruby

Bees and other pollinating insects play an essential role in ecosystems. A third of all our food depends on their pollination. A world without pollinators would be devastating for food production.

Considering their vital role in the production of our food, we traveled in small groups to our garden at Coleman P-patch to closely study how bees pollinate the flowers of our fruits and vegetables. Using our science journals, we carefully recorded the different pollinators that entered different zones of our garden and took note of what flowers they took pollen from.

Students from the Primary Classroom trekked around the neighborhood one day and took inventory in their science journals of the different colored, flowering shrubs and vines to make guesses about which pollinators might be most prevalent around our school.

"How are bee brains different than ours?" - Leah

A FAIR bell-flower Sprang tip from the ground; And early its fragrance It shed all around; A bee came thither And sipp'd from its bell; That they for each other Were made, we see well.

We wondered about which came first, the bee or the flower? To explore this wondering, children read The Reason for a Flower by Ruth Keller.

“Bees are reaching their tipping point because they are expected to perform in an increasingly inhospitable world.” – The Xerces Society

Towards the end of our study, we watched a wonderful documentary, The Vanishing of the Bees, which helped us understand the reasons for the global decline in honey bee populations. The main reasons for the global disappearance of bees are: Industrial agriculture, parasites/pathogens and climate change. The loss of biodiversity, destruction of habitat and lack of forage due to monocultures and bee killing pesticides are particular threats for honeybees and wild pollinators. While the bees can cope with some of the demands of climate change, it is becoming increasingly evident that some insecticides used our current chemical-intensive agriculture system exert clear, negative effects on the health of pollinators.

"The Food and Agriculture Organisation of the United Nations (FAO) estimates that out of some 100 crop species which provide 90% of food worldwide, 71 of these are bee-pollinated. In Europe alone, 84% of the 264 crop species are animal pollinated and 4 000 vegetable varieties exist thanks to pollination by bees.” – UNEP, 2010

Learning about the declining bee populations and the significant role pesticide companies, such as Bayer, play in their disappearance made us upset and left us inspired to do whatever we could to help create awareness for the bees in our own communities. The children made signs to post around the neighborhood. Some wrote articles, comics and poems to be included in a bee-focused newspaper that will be distributed around Mt. Baker neighborhood this month.

Beyond agriculture, pollinators are keystone species in most land-based ecosystems. Conservation of pollinating insects is critically important to preserving both wider biodiversity and healthy agricultural systems. With the knowledge and love we've gained for bees, we hope to continue to monitor the health of bees and do what we can to help them. To learn more about what you can do at home to help the bees, follow the following links:

PBS: Silence of the Bees

You Are From Here: Presenting the Lake and Park Class of 2020

"A Good Poem Can Jolt Our Minds" by Eileen